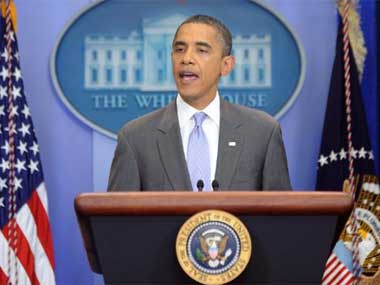 Washington: The ties between the US and Saudi Arabia are characterised by extensive counter-terrorism cooperation, the White House said, moments before President Barack Obama left for the Kingdom.

“It is a relationship that is characterised by extensive counter-terrorism cooperation. That cooperation enhances our national security and makes the American people safer. The Saudi government happens to think that it enhances the national security of their country as well and makes the Saudi people safer as well. That is why we are able to cooperate,” White House Press Secretary Josh Earnest said on Tuesday.

On Tuesday,Obama along with his top officials left White House from the Andrews Airforce Base for his six-day three nation tour starting with Saudi Arabia. The UK and Germany are the other two countries where he will visit.

Earnest also responded to a question on the opposition of the White House to a legislation tabled in the Senate which if passed would allow victims of the 9/11 terrorist attack to sue Saudi Arabia. US media has reported that Saudi Arabia has threatened to withdraw its $ 750 billion investment in the US if such a legislation is passed. The White House has indicated that Obama will veto such a bill.

The Speaker of House of Representatives Paul Ryan indicated that he atleast had some more concerns with the way that this bill is structured because of the consequences it could have for the US relationship not just with Saudi Arabia but with countries around the world, he said.

“I think that taking a step like this would significantly enhance the risk to the US not in the context of our relationship with Saudi Arabia necessarily, but the concern that we have is much broader than that. Our concern is with our ability to do business in countries around the world. And sometimes it is not just related to economic business, but actually to the business of our national security, to the business of the functioning of the state – whether that relates to national security operations, or in some cases, even humanitarian operations,” Earnest added.