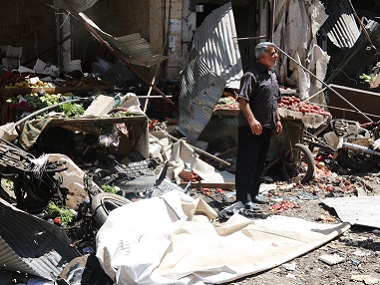 A Syrian man stands amid debris following an air strike on a vegetable market in Maaret al-Numan, in Syria's northern province of Idlib, on April 19, 2016. Suspected government air strikes killed at least 44 civilians at two markets in a part of northwestern Syria controlled by the war-torn country's Al-Qaeda affiliate, the Syrian Observatory for Human Rights said. / AFP PHOTO / Mohamed al-Bakour

Geneva: Syrian opposition leaders started leaving Geneva after air strikes on markets in the northwest killed at least 44 people, saying they could not take part in peace talks while civilians were dying daily.

In some of the deadliest violence since a ceasefire took effect in February, a suspected regime bombing raid on Tuesday hit a market in the city of Maaret al-Numan, killing at least 37 civilians, a monitor said.

Another strike on a fish market in the nearby town of Kafranbel killed seven civilians, said the Syrian Observatory for Human Rights, a Britain-based monitoring group.

The strikes were in Idlib province, which is under the control of Al-Qaeda’s Syrian offshoot Al-Nusra Front.

Like the Islamic State group, Al-Nusra is excluded from the ceasefire and regime forces have continued offensives in areas under its control.

The main opposition High Negotiations Committee condemned the strike on Maaret al-Numan as a “massacre” and clear violation of the truce.

“It is a dangerous escalation of an already fragile situation, showing contempt for the whole international community at a time when there is supposed to be a cessation of hostilities,” said spokesman Salem al-Meslet.

The raid was “Assad’s response” to the HNC’s decision to suspend its formal participation in negotiations.

“Our decision to postpone our participation in the Geneva talks was taken to highlight the cynicism of the regime in pretending to negotiate while escalating the violence… The world must not ignore this challenge,” said Meslet.

The troubled talks — the latest in a long series of efforts to end Syria’s five-year conflict — failed to get off the ground this week despite hopes brought on by the ceasefire.

The partial truce, brokered by the United States and Russia, led to a dramatic drop in violence across Syria but a recent surge in fighting, especially around second city Aleppo, has raised fears of its total collapse.

The opposition announced Monday it was putting its participation on hold to protest escalating violence and restrictions on humanitarian access.

HNC coordinator Riyad Hijab said Tuesday that he and other delegates were beginning to leave Geneva.

“I will be travelling today along with some of my colleagues from the HNC. Some people left yesterday and today and they will keep leaving gradually until Friday,” he said.

“It is not suitable, neither morally nor on the humanitarian side, to be part of negotiations when Syrians are dying daily from sieges, hunger, bombings, poisonous gases and barrel bombs.”

The UN has insisted the talks have not collapsed, with its envoy Staffan de Mistura saying they would continue through the week.

Russian Foreign Minister Sergei Lavrov also insisted the talks were “not frozen” while US State Department spokesman John Kirby said “we continue to believe in the political process, in the importance of these talks”.

‘Price of time is blood’

This week’s negotiations were meant to focus on Syria’s political future, as the UN pushes a plan involving a transitional authority, a new constitution and eventual elections.

But Assad’s fate has been the key sticking point, with the opposition insisting he must go and the regime refusing.

Speaking in Moscow, Lavrov said: “No one can win the war. All experts recognise this.

“There are some external players who dream about deposing the regime by force and try to do everything including disrupting the talks in Geneva.”

The regime’s lead negotiator reiterated Tuesday that Assad’s fate remained off-limits but said Damascus was prepared to discuss the creation of a new unity government.

“A broader unity government is the only topic of discussion here,” said Bashar al-Jafaari, Syria’s ambassador to the UN.

World powers have backed the ceasefire and talks as the best hope yet to end a conflict that has devastated Syria, killed more than 270,000 people and forced millions from their homes.

But the rising violence in recent weeks has lowered expectations of a breakthrough.

Hijab called for international observers to be sent in and for ceasefire violators to be held to account.

He warned against wasting time, saying: “For Syrians the price of time is blood.”

Danish lawmakers, meanwhile, approved a plan to commit F-16 warplanes and 400 military personnel, including special forces, to expand the country’s fight against IS from “mid-2016”.

Prime Minister Lars Lokke Rasmussen said the jihadist group “should meet a powerful response from the outside world”.