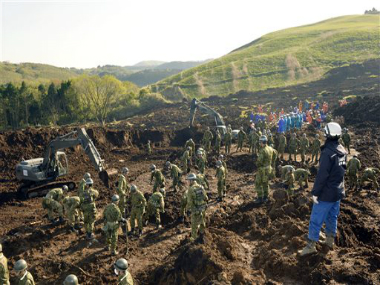 Kumamoto prefecture said that another 11 have died from illnesses believed to be related to the physical stress of evacuation.

More than 100,000 people are homeless or have fled their homes as aftershocks continue to shake the area. Many are living in cramped conditions in shelters or even their cars, with limited food and water.

A magnitude 6.5 earthquake on Thursday night followed by a 7.3 quake early Saturday morning caused widespread damage in parts of Kumamoto city and surrounding communities on the island of Kyushu, the southernmost of Japan’s four main islands.

The body was found in the mountain village of Minamiaso, where the second quake triggered landslides that slammed into buildings and across roads. Soldiers and other rescue workers used backhoes and shovels to search through dirt and debris for the missing.

In all, 14 victims have been found in Minamiaso. The hardest-hit town appears to be Mashiko, where 20 people died. Kumamoto prefecture has tallied 1,453 homes destroyed so far, of which 1,026 are in Mashiko.