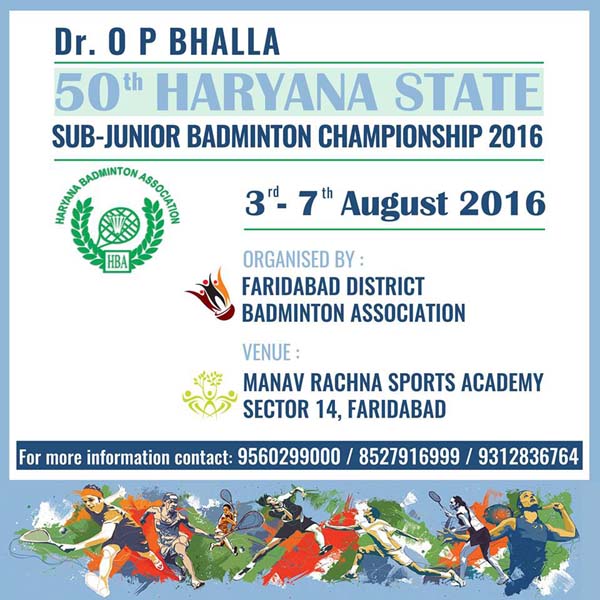 Faridabad(standardnews).. District Badminton Association (FDBA) is poised to take Badminton to new heights of sporting excellence as it gears up for the State Championship in the city. The Tournament is being held in memory of Founder Visionary Dr O.P. Bhalla who ardently espoused the cause of Sports in North India and made it an integral part of the curriculum at Manav Rachna Educational Institutions (MREI). The Tournamant is being held from 3 August-7 August, 2016 at Manav Rachna Sports academy Sector 14, Faridabad. The FDBA-organised Championship is likely to attract 700 participants from 22 districts of Haryana, making it a premier sporting event of the year. Haryana’s front ranking badminton and budding players at the sub junior level are going to rise to the challenge and provide tough competition to each other at this Championship.It is noteworthy that Manav Rachna Educational Institutions is deeply enmeshed in a sports-centric philosophy, a culture that was first propagated by Founder Visionary Dr O.P. Bhalla. He believed that a healthy mind resides in a healthy body and emphasized upon sports as a major contributor of societal upliftment. It is in keeping with his philosophy and visionary zeal, Manav Rachna has left no stone unturned in providing the latest in sports facilities to students. At the Manav Rachna Sports Academy (MRSA), there exists state-of-the-art infrastructure facilities and training provided by renowned names in the national and international sports circuits. Many of the sports facilities have been designed in consultation with leading brands like YONEX (for Badminton) and STAG (for table tennis). MRSA has to its credit fully air-conditioned six synthetic Badminton courts which offer unmatched shock absorption, elasticity and stability to the athletes. The present Championship would not only provide superior world class infrastructure but also the guidance of national and international level coaches.