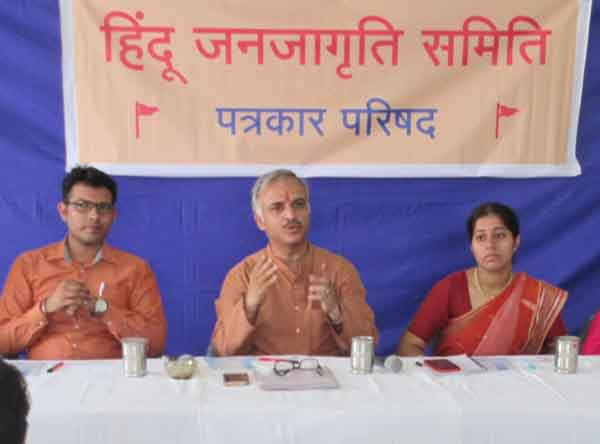 Faridabad/Goa…( Manoj Bhardwaj/Standard News) The 5th All India Hindu Convention aimed at building nation-wide unity of the Hindu organisations for the establishment of the Hindu Nation is starting on 19th June at Goa. The Convention, lasting until 25th June, will be attended by more than 415 delegates from more than 125 organisations in 21 States of Bharat, along with those from Nepal, Bangladesh and Sri Lanka. 21 delegates from Delhi-NCR, Punjab, Haryana and West Uttar Pradesh will be attending the Convention. This information was given by Mr. Suresh Munjal in a press conference held at Mahaveer Hospital. Adv. Prashant Patel, Secretary & Spokesperson, Hindu Legal Cell; Adv. (Mrs.) Chetna Sharma, National President, Hindu Swabhimaan; Mr. Ajit Patwa and Ms. Kritika Khatri, Sanatan Sanstha also attended the press conference. Mr. Suresh Munjal further said Despite a Hindutvavadi party is in power, the demands of Hindus, pending since last many years are still not fulfilled. The Government has not taken any firm stand on the topics such as rehabilitation of Kashmiri Hindus, withdrawal of Article 370, a ban on cow slaughter, re-building Ram Temple etc. Therefore, Hindu organisations will now take a lead to convey the proclamation of the ‘Hindu Nation’ to the public through the medium of this Convention. As finalised in last 4 Conventions, agitations were also held in Haryana (in Ballabhgarh, Faridabad) and New Delhi on the subjects such as Ban on Cow Slaughter, Against ISIS, Raising of Anti-National Slogans in Jawaharlal Nehru University, etc. Similarly, a State-Level Hindu Convention was also organised from 19-20 December, 2015 I New Delhi, in which delegates from over 4 States participated, for achieving the unity among local Hindu organisations. An attempt to speed up this mission will be made in the 5th Convention.From this place, Adv. Prashant Patel from Hindu Legal Cell, Adv. (Mrs.) Chetna Sharma from Hindu Swabhimaan and Ms. Kritika Khatri from Sanatan Sanstha will be participating in the Convention.

Share this on WhatsApp
Tags: All India Hindu ConventiongoaThe 5th