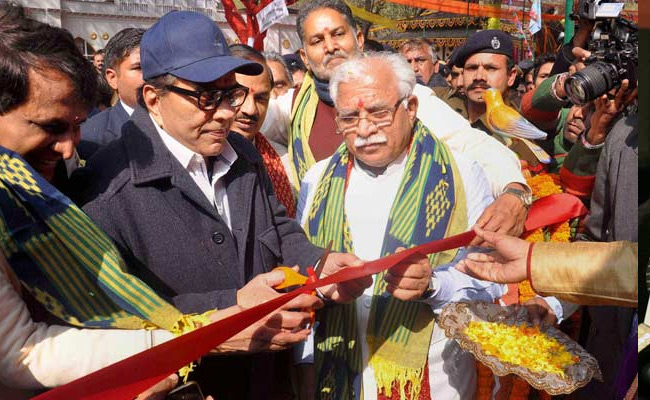 Faridabad:  The 30th edition of the annual Surajkund international crafts fair begun on Monday with artists from over 20 countries participating in the cultural extravaganza.

The event was inaugurated by Haryana Chief Minister Manohar Lal Khattar and said “and the Surajkund Mela offers a platform to people from different cultures to learn from each other.”

The Chief Minister later took rounds of different pavilions, and visited the pavilion of this year’s theme state Telangana and interacted with its craftsmen.

Brand ambassador of Haryana Tourism and cinestar, Dharmendra, was also present in the fair.

Mahesh Sharma said the Mela has attained the status of an international calendar event and complimented Haryana’s efforts to boost its tourism.

He said the Union Tourism Ministry was preparing a special scheme to attract tourists to the 7,500 km coastal area of the country.

Suresh Prabhu also expressed happiness that this Mela is a “symbol of pride” and has brought “great reputation” to Haryana.

The Indian Railways official website (irctc.com) is in a process to market indigenous handicrafts and offer craftspersons a global market.