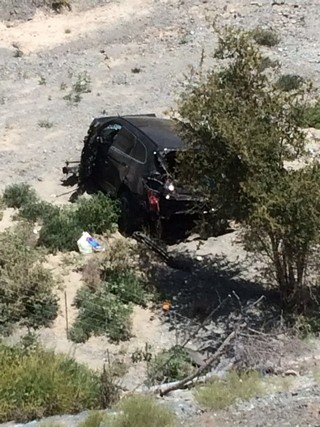 RAS AL KHAIMAH // An Indian family has been devastated after a horrific car crash killed a 10-year-old boy and left his parents badly injured.

Manas Kunnummal died when the car his family were travelling in overturned and rolled down a hill after his father fell asleep at the wheel.

His father, Sreekumar Kunnummal, is now in a coma at Fujairah Hospital, suffering from a chest injury and internal bleeding, while his mother, Neethu, 34, has a spinal cord injury. His sister, Madha, 7, has a broken leg and hand.

They were heading home to Sharjah, from Fujairah, when the incident occurred in Al Qudra, a remote area of Ras Al Khaimah, at around 12.30am on Saturday morning, the Indian Association of Fujairah said on Tuesday.

Savad Yusuf, joint consultation secretary at the association and a friend of the family, said he found out at 8.30am on Saturday and went straight to the hospital with other members of the association.

“They were all tired and sleeping in the car when the accident happened. Sreekumar Kunnummal, the father, was driving when he accidentally slept, lost control of the car and went down the hill,” said Mr Yusuf.

“A passer-by informed the police and they took two hours to rescue the Kunnummal family as the area had no light and was somewhat remote. It was difficult to reach them.”

The family arrived at the hospital by 2.30am and Manas Kunnummal was pronounced dead on arrival.

“The father can’t breathe on his own and is still unconscious. The mother, Neethu, 34, has a serious spinal cord injury and had a three-hour operation today, while the daughter, Madha, 7, has a broken leg and hand and will have an operation tomorrow,” Mr Yusuf added.

The association has nearly finalised paperwork to send the body of the boy home to India.

“Ninety-five per cent of the paperwork is done and we hope that we can send the body tomorrow to India,” said Mr Yusuf.